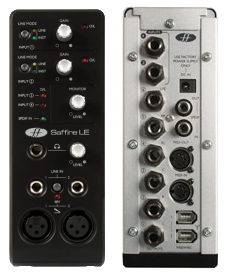 This is going to be one short review. There really isn’t much too say about the Saffire LE. It does the job it is supposed to do just fine, sounds decent and requires very little attention or care.

Earlier drivers were not as solid as the current one, with occasional glitches, but nowadays it is stable and reliable; the only quirk I encounter every now and then is that it fails to sync up when the computer comes out of sleep mode (or restart) but that does not happen often and dis- and reconnecting the cable takes care of that.

Within Cubase I normally have the buffer on 256 samples as that is the sweet spot for my aging iMac, but I have used the LE at 128 without problems. Sharing the firewire buss with other devices is a mixed bag, it worked fine with an Iomega HDD but with a WD Mybook not so much.

The mic preamps do the job, but no more than that. To me that is the LE’s weakest link, you’ll get the signal but it is a little thin and when you hit the limit things sound nasty. Line levels are slightly low, too. That could be the price you pay for a buss-powered device. Connectivity is good, though, and the software control panel/mixer is easy to understand and adjust.

This box is never going to win any awards, it is unassuming and not anything special. But it does not get in the way of you and the music and facilitates the recording process well enough.

For the money you can’t complain for what you get. Nothing is great, but everything works well. A good first audio IO for people on a budget. Nice.

edit:
As an afterthought: I suspect that this unit is really an M-Audio interface disguised as a Focusrite. when I check the system processes in OSX’ Activity Monitor there is only an M-Audio firmware root process, and I don’t own or have connected any of their stuff.